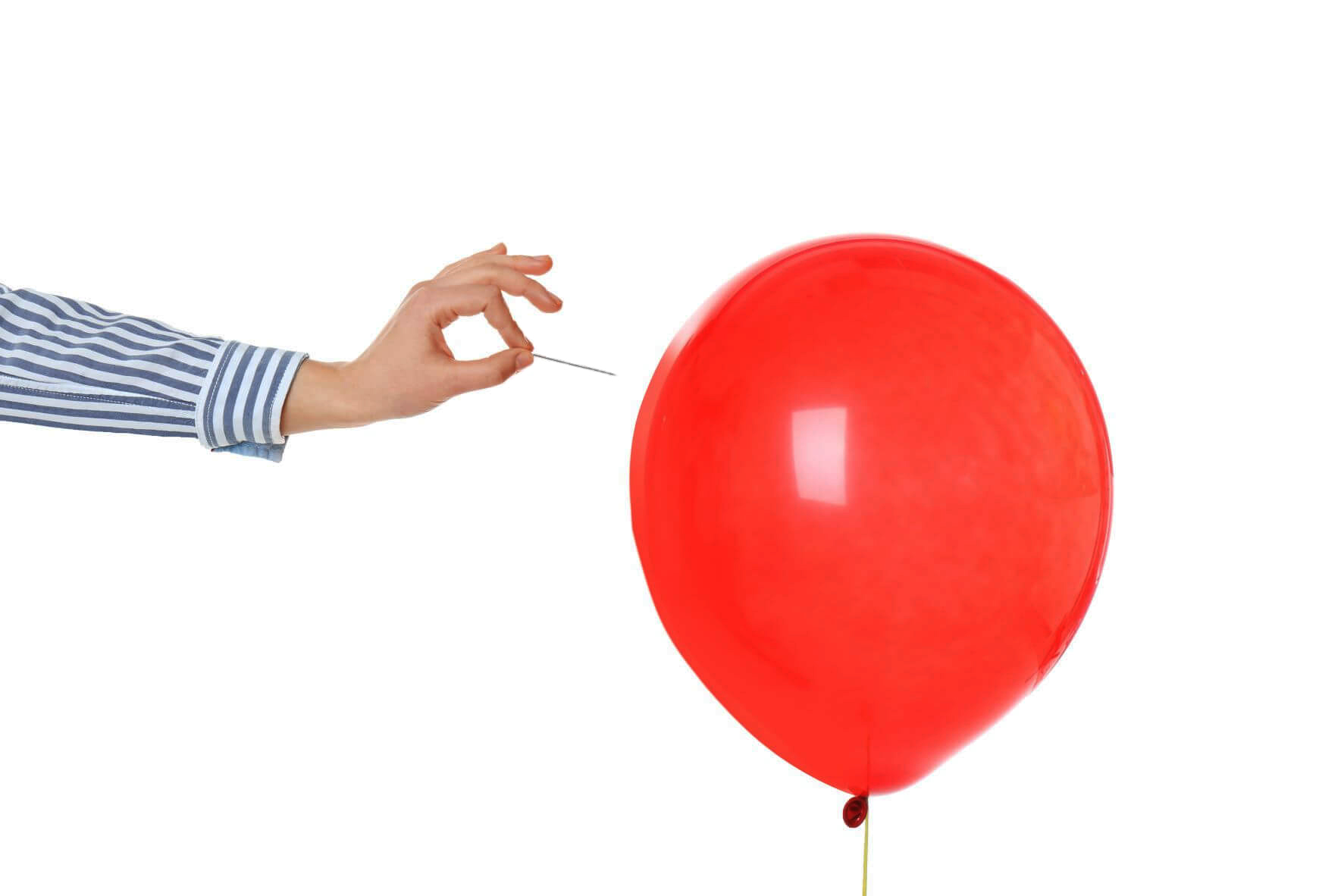 The recent run-up in mega cap companies and their dominance of index returns over the past five years has created conditions investors should be aware of. When markets are this far out into historical extremes, a reversion to the mean may follow.

Stock market capital distribution has tended to remain very consistent over time. The figure below shows the capital distribution curve of the U.S. stock market (using the CRSP database as a proxy) based on the capitalization weights of its stock positions ranked from largest to smallest. Beginning-of-year snapshots using 10-year intervals between 1981 and 2021 show this distribution has been remarkably stable, with stocks at each size-ranking generally maintaining a similar average capitalization weight throughout the past 40 years. 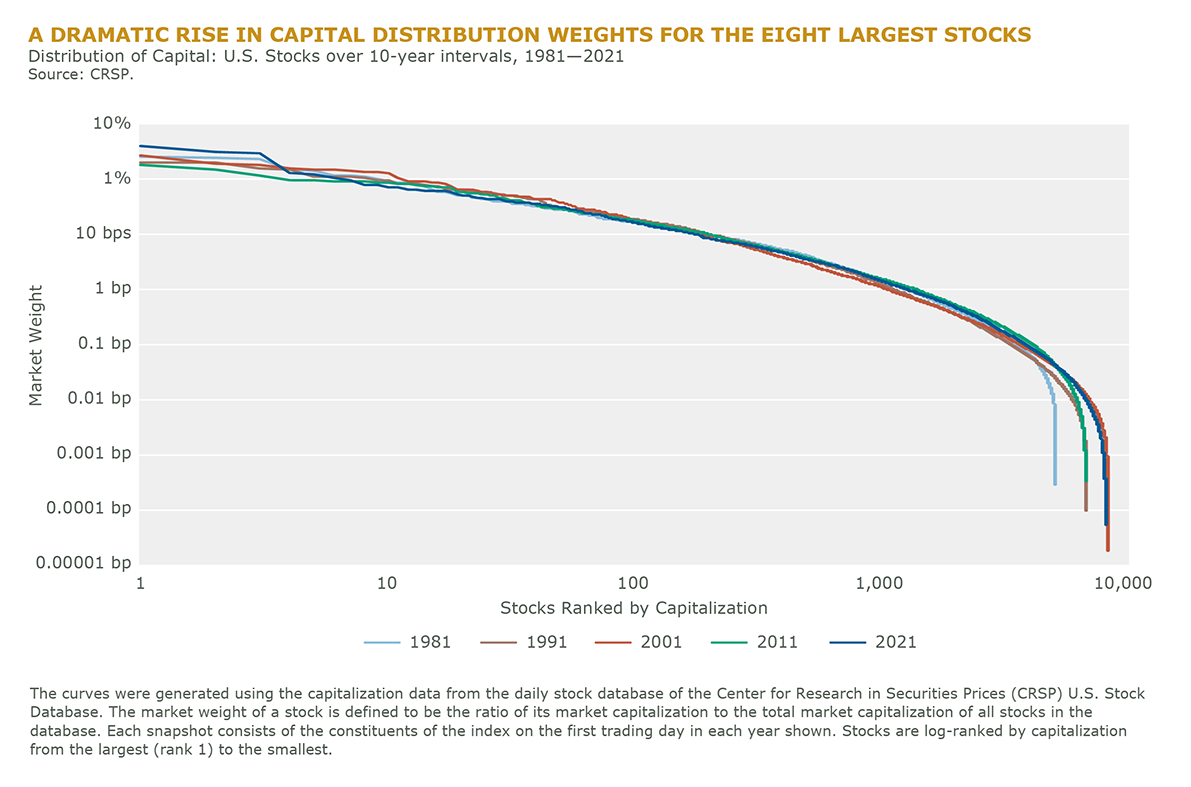 Most shorter-term variances from these longer-term averages have been at the largest and smallest ends of the distribution curve. This definitely has been the case in the most recent period, which has experienced a sharp jump in the eight largest stock weights, unlike anything observed in the earlier timeframes. Based on history, we expect this type of disruption should return to a more stabilized norm at some point, as has been the case across prior periods.

Recently, both the growth and global indices have seen similar large increases in the capital distribution weightings of their very largest stocks. There is, however, no such uptick in global developed markets when U.S. stocks are taken out of the equation. Consequently, it appears that investors should currently be most concerned with market capital concentration risk in their U.S. large-cap exposures, especially in growth security heavy allocations.

Warren Buffet made famous the total stock market capitalization-to-GDP ratio to determine whether the overall market appeared undervalued or overvalued compared to its historical average. The ratio of these two values represents expected future returns relative to current price because stock market capitalization represents expectations of future economic activity, while GDP is a measure of actual economic activity. The expectation is that this ratio should be relatively stable over time, only slowly increasing as technology allows for greater efficiencies in labor and capital over time. When the ratio rises quickly, it should be a red flag for investors that the market appears overvalued.

We analyzed this ratio using just the largest 10 stocks by market capitalization. The figure below shows the ratio (blue line) compared to these stocks’ weight relative to the entire U.S. market (grey line) and also to their collective market capitalizations (red line).

Observing this data, it seems clear that there have been two broad eras of stock market growth in terms of the largest stocks. For much of the 1930s, ‘40s, ‘50s and ‘60s, it was not uncommon for the 10 largest stocks to represent anywhere between a high-20 to low-30 percent of the market. This began to substantially change through the ‘70s until reaching a post-1980 era of much greater market capital diversification, due to a broadening of publicly traded firms from across the economy, increased competition, higher profit margins, lower taxes and a decreasing discount rate.

However, even if we take the position that at the end of 2021 the weight in the largest stocks is no different from a prior era, the ratio of capitalization-to-GDP has risen significantly during the past three years and is at a level that suggests valuations are quite extended relative to these securities’ histories. A similar rise can be seen during the dot-com bubble.

Of course, extremely low interest rates may help to continue the large flow of capital to these stocks. It appears, however, that rising rates or shifting capital to smaller stocks could result in substantial performance headwinds if these stocks fall short of expectations.

In our view, the main takeaway from this research is that investors may want to review mega-cap exposures in their U.S. large-cap holdings, particularly if they are highly concentrated in passive strategies where allocations have likely escalated. Current momentum may certainly continue for the time being, but history has shown that investors ignore the long-term trend of mean reversion at their own risk. Reversals tend to occur quickly and often with consequential market moves. The question is, will investors be ready?

At this point, it seems prudent to keep your bases covered by reallocating at least a portion of large-cap exposures to strategies that can help lower mega-cap concentration risk. The current climate has been a significant headwind for actively managed, risk-controlled strategies focused on broad diversification, as any active large-cap manager who didn’t own the top mega-cap names in a major way during the past several years was almost certain to lag its index. Looking ahead, these types of strategies should be well-positioned to help protect assets when this cycle shifts.

The largest U.S. mega-cap stocks now also look to be richly valued by some market measures. This potentially precarious combination of relatively high valuations and reduced diversification may have notably elevated the risk profiles of many investors’ large-cap allocations. To see how returns in increasingly large mega caps have propped up cap-weighted index returns – and why it may not continue – download the full paper. 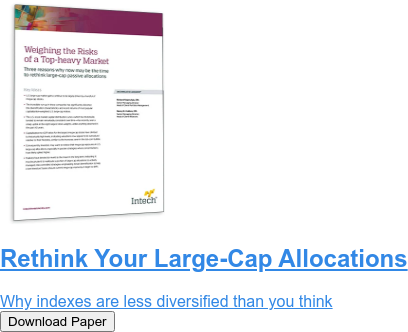 The views presented are for information purposes only and should not be used or construed as investment, legal or tax advice or as an offer to sell, a solicitation of an offer to buy, or a recommendation to buy, sell or hold any security, investment strategy or market sector. Nor do they purport to address the financial objectives or specific investment needs of any individual reader, investor, or organization. The views are subject to change at any time based upon market or other conditions, are current as of the date indicated, and may be superseded by subsequent market events or other conditions.

Past performance is no guarantee of future results. Investing involves risk, including the possible loss of principal and fluctuation of value. As with all investments, there are inherent risks that need to be considered.

MSCI makes no express or implied warranties or representations and shall have no liability whatsoever with respect to any MSCI data contained herein. The MSCI data may not be further redistributed or used as a basis for other indices or any securities or financial products. This material has not been approved, reviewed, or produced by MSCI.