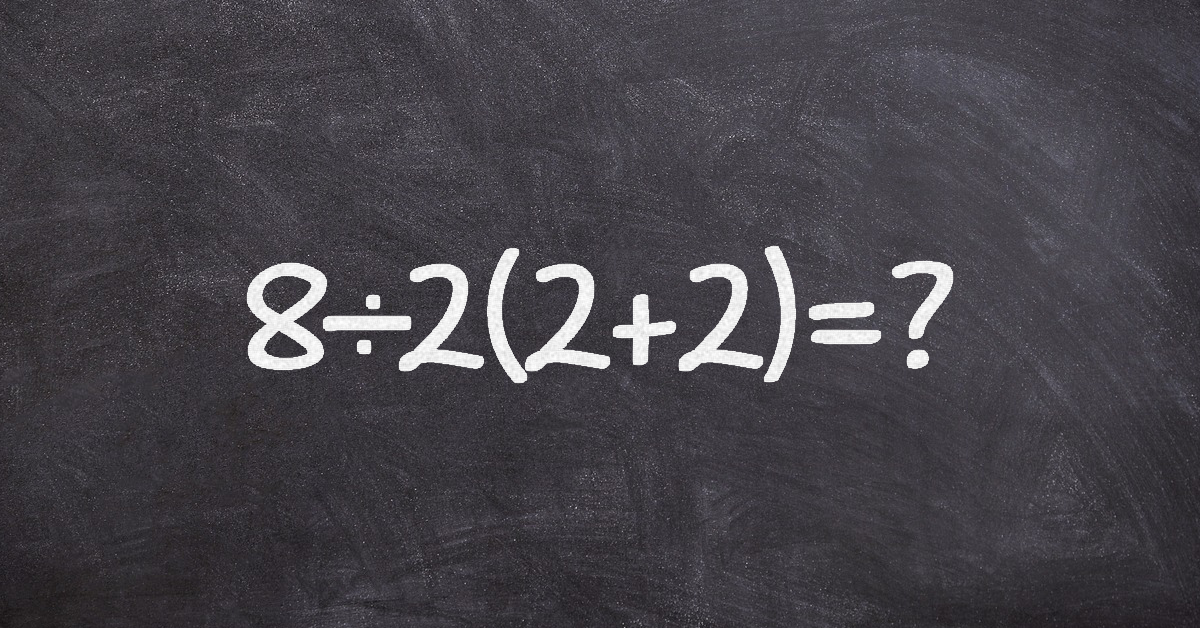 We Love this Outburst of Math Obsession

Somewhat unusually for the Twitter-sphere, where celebrity gossip and partisan invective is the norm, an arithmetic-related Tweet trended strongly last week. Its popularity is a particularly clear demonstration of the popular misunderstandings of what math is really all about.

In case you’ve not seen it already: the Tweet asks for the correct way to evaluate a mathematical expression: 8÷2(2+2). For a mathematician, or a scientist with a strong math background, it is immediately clear that there’s an ambiguity in how this should be evaluated. Depending on the convention that one chooses to adopt, the expression has different meanings, or no meaning at all. Move along, nothing to see here.

Nevertheless, this triviality has been exciting strong passions. That’s because, for most people, math is a set of rules that is taught religiously and meant to be thought of unquestioningly. It’s received with reverence as impenetrable wisdom that cannot be debated or disputed. Questioning whether “1+1=2” is true is often shorthand for doubting one’s own sanity.

Where Does this Passion Come From?

In arithmetic, even calculations like multiplication or division can be performed in many ways, all equally valid (if not equally practical). However, in most K-12 school systems, the emphasis on uniformity required to keep the syllabus under control, and answers in exam questions convenient to grade, typically lead to forced adoption of the one and only TRUE way — perverse deviations to orthodoxy are not to be excused or tolerated! While subjects such as literature or history often emphasize subjectivity (the students’ personal reaction to a text, or interpretation of an historical event), math is often taught as inflexible dogma.

Returning to the Tweet, the ambiguity in the math expression is very good at stirring up bitter disagreement precisely because it cleaves along a fault line between popular conventions on how to decide in which order to tackle the smaller bits of the full calculation (“the order of operations”). It’s not clear if this ambiguity was deliberate (i.e., an instance of successful trolling); it does seem pretty clear that the passions aroused had deep roots, going back to elementary school.

Still, real math is about almost the opposite of what the Tweet is based on. Math is about creativity and imagination, instead of pedantically arguing about rules. In fact, the rules themselves are often interchangeable to a degree; the rules’ only accepted, and only needed, justification is that they lead to interesting places.

Math conventions, or axioms, are like the rules of a game; they are meant to be agreed upon by all sides in order to achieve a purpose, but their acceptance is voluntary and conditional. In fact, the most interesting math is often about the rules themselves: figuring out what rules are necessary to arrive to a particular result, or what is the smallest or simplest set of rules that can effectively encode a particular concept.

Far from the cliché of math leading to dispassionate detachment, it often is an intimate experience to trace someone else’s intellectual path over a rough terrain, or share delight on an unexpected and creative observation. Even people from quite different backgrounds can not only bond over their shared interest, but also communicate clearly through the language of math. As a result, mathematics can be powerful in bringing people together.

At any rate, here’s to hoping that, despite the superficial frothing, this Tweet helps bring math a bit closer to the center of culture, and gives the opportunity to people who find it genuinely exciting to get others hooked on it!

This information is intended to be educational and is not tailored to the investment needs of any specific investor, nor is it an endorsement or recommendation for any particular security or trading strategy. You should not rely on this information as the primary basis for your investment, financial, or tax planning decisions. Past performance cannot guarantee future results. Investing involves risk, including the possible loss of principal and fluctuation of value.